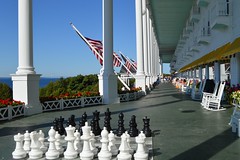 Here’s a collection of photos of Mackinac Island during the winter:

Grand Hotel – April 25, 2014
Congratulations to our transportation partner Shepler’s Mackinac Island Ferry for being the 1st vessel to arrive to Mackinac Island this season. We look forward to a great season!

Cawthorne’s Village Inn – Mackinac Island – February 7, 2014
A wonderful sight to see on a Friday afternoon, and we hear there are more coming across to visit. If you are among the adventurous coming to Mackinac this weekend, stop in and say Hi.

Grand Hotel – January 2, 2014
It may be snow covered and cold, but the sun is shining and the sky is beautifully blue on Mackinac! #winter #grandhotelmichigan #mackinacisland

Cottage Inn of Mackinac – January 1, 2014
Another successful Great Turtle Drop. Happy New Year to all and to all a goodnight.

Original Murdick’s Fudge – December 26, 2013
A snowy downtown Mackinac Island with a 1,000-footer heading toward the Mackinac Bridge and Lake Michigan.

Grand Hotel – December 15, 2013
Snowfall accumulation is beautiful today. Islanders are out enjoying the beauty of winter on Mackinac.

Original Murdick’s Fudge – December 12, 2012
A quiet Fort Mackinac under a blanket of snow.

Chippewa Hotel – November 25, 2012
First heavy snowfall on the Island, and one word to describe it: Beautiful!

Mission Point Resort – March 26, 2012
The ferry passing Mission Point as they go the long way around the island! A welcome sight!

Arnold Mackinac Island Ferry – March 22, 2012
The crew punched holes in the ice and the “Mighty Huron” is running at the dock… Anticipating breaking through the ice so we can start running sometime next week!

Grand Hotel – March 3, 2012
A few Grand Hotel employees having fun on the frozen lake this winter. (Look close and you will see the Mackinac Bridge in the background. )

Star Line Mackinac Island Ferry – February 4, 2012
The view for a couple of native islanders who walked from Mackinac Island to St. Ignace this morning. It took them about 3 hours.

Metivier Inn: Bed & Breakfast – January 16, 2012
Some still get around on bikes even with the snow.