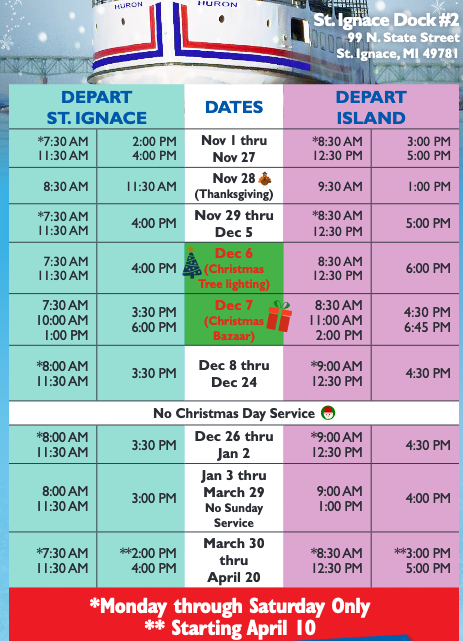 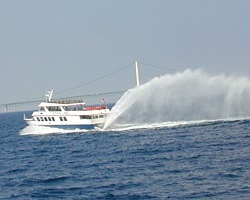 Star Line Mackinac Island Ferry offers winter ferry service from St. Ignace to Mackinac Island November thru April, weather permitting. (Service is halted during the winter when the harbors freeze over – generally sometime in January to sometime in March or April. Check the website and/or facebook page for latest updates on service.)

Board the barrier free main decks of a Star Line Hydro-Jet ferry and enjoy a panoramic view of the Straits that includes the Mackinac Bridge.

Then sit back, relax and enjoy the area’s scenic beauty, from the comfort of our glass enclosed cabins or our open air observation decks. Watch as Star Line’s Hydro-Jets produce their distinctive 35′ roostertail spray.

Below are the latest postings from the Star Line Mackinac Island Ferry Page On Facebook.

Love our state,so beautiful. Sure hope god sees it in his wisdom and sight to let us visit our favorite places again this fall. Heal our state. <3

Where is this lighthouse?

I cross my fingers and hope that I can see all this beauty when I come to visit Michigan in October...Stay healty, stay strong all of you !

This is a beautiful picture! Each year as we go, I always try to get a perfect picture, nothing like this one!

Mirror Mirror on the lake.... Upper Michigan is the fairest of all❗❗

please go to Mackinac Island!! it is MAGICAL!!!

Love this place. So peaceful

Perfect. A shelter in the storm, but not today.

The boats are better at social distancing than some humans I know. Some people could learn a lesson from these boats.

One of the many blessings we are thankful for right now! Early morning sunrise over Mackinac Island

Hope to see it this summer. So beautiful.

Breathtaking!! Love it up there

Thanks for sharing Caption Sid!

Oh my, What peacefulness thank you for the picture

I’m so hoping to go in late May/early June,but it’s looking like Fall

Bought our passes in November can't wait to go.

I forgot how much I miss the color blue in the sky!!!

Hell if I could travel I'd be there now

I want to go so bad

During that time Star Line has made continuous improvements to the vessel. She has visited the Burger Boat yard twice since 2016 for some major hull replacement, other repairs to her internal structure and mechanical updates. These changes were made in preparation for the third and final update to the Huron which are scheduled to be completed this summer at the Mackinac Marine Services ship yard in Saint Ignace, Michigan.

Some of the modernization updates that Star Line has commissioned for the boat is a complete electrification of the vessels proposal system. The existing Caterpillar engine will be replaced with an electric drive system modeled after the new Tesla semi-truck platform. Including a Tesla Supercharging battery array and solar roof charging system. The upgrades will also include the installation of hydrofoils to the ship’s hull, allowing for greater speed and stability during its trips to Mackinac Island and back. In the winter, the hydrofoils can be outfitted with special edges which allow the boat to travel over the frozen lake surface.

Another critical modification is the addition of Star Line’s patented technology known as the “Hydro-Jet®”. The Hydro-Jet will give the boat a significant speed increase, which is needed to reach hydrofoil velocity and will also produce Star Line’s signature “Rooster Tail” water spray at the back of the boat. With these updates the Huron is expected to exceed speeds of 30 MPH.

When asked about the about the Huron’s updates Star Line Senior Fleet Captain Kyle Wallis said “She is a heck of a boat and has been servicing Mackinac Island for many decades. With these new modifications she will provide service to the future and beyond!”

Star Line’s CEO said “We are all excited to get the Mighty Huron back into service as the updates are expected to be completed ahead of scheduled and to be well under budget.” ... See MoreSee Less

Me & Jonny still think ya could pull skiers with them classic (not gonna fight them roostertails). www.google.com/imgres?imgurl=https%3A%2F%2Fvignette.wikia.nocookie.net%2Fjonnyquest%2Fimages%2Ff%...

Ok “guys “ no more , I’m too old for this stuff , totally believe in the goodness and truth of everyone!!!

The horses enjoying a smooth trip 😂👍

Cool. And I only know about hydrofoil design from reading The Hardy's Boys books😁!!

Have you considered using a drag chute? I"m afraid that the upgrades may cause you to overshoot the Island before you can get her stopped.

Pleased to read a good one!😆

Surface piercing hydrofoils?!? Everyone knows submerged hydrofoils have less drag and better control with active steering controls...I sure hope this is not an April fools joke...

Does employees from the island get a discount on tickets

The funniest part of this post is reading the comments from people completely missing the joke.

Will james bond be the pilot...

Somebody has too much time on their hands. Like all of us do.

Very well written. Almost had me!

What, no flux capacitor? 🙂

Looks good with a blue bottom!