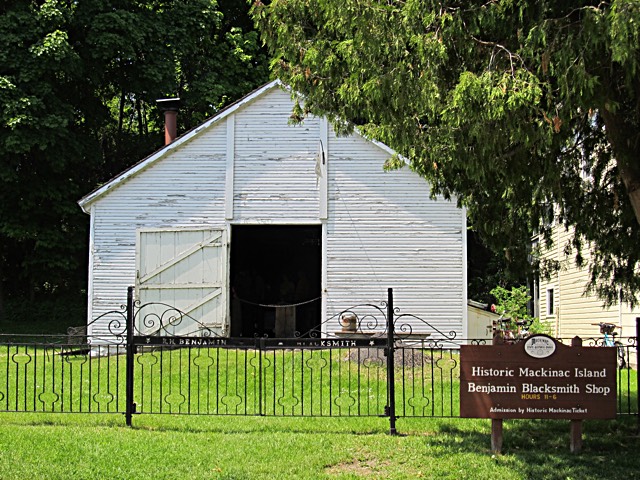 The Benjamin Blacksmith Shop was located on the west end of Market Street (just past Cadotte Avenue, on the south side on “Benjamin Hill.”). Originally known as “Star Blacksmith Shop,” it was sold by William Jackson to Robert Benjamin and Frank Cummins in 1885. In 1900 Robert’s sixteen year old son Herbert took over operation of the shop when Robert was elected Mackinac County sheriff and moved to St. Ignace. Herbert continued to offer the variety of services his father had, including the repair of iron objects, small manufacturing jobs, shoeing horses, and repairing carriages.

By the middle 20th century his services had expanded to that of a small machine shop with the repair of yacht motors and lawn mowers. As autos had been banned on the island by the turn of the twentieth century, shoeing horses always remained part of the operation. Herbert ran the shop until 1965.

In 1968 the shop and its vast array of contents were donated to the Park Commission by Herbert’s family. There was one proviso: The shop building had to be removed from its site at the western end of Market Street. The commission accepted the offer, and selected a new site on the east part of the Biddle House lot. Assistant Director Dr. David Armour and Staff Archaeologist Lyle M. Stone carefully documented the building and its contents during the winter of 1968. The new site was smaller than the original, so only about two thirds of the blacksmith shop could be recontructed. Floorboards, windows, and other pieces were salvaged and used in the reconstruction, and all the objects were put back in approrpriate places. The shop opened to the public in 1970.