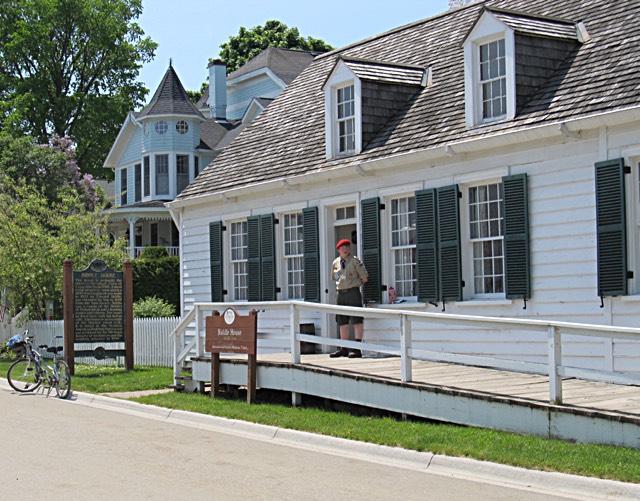 The exact date of construction of the Biddle House is not known. The lot was first owned by John Ogilvy, briefly sold to John Campbell, and then to Robert Dickson. The building is first documented in 1797, but may date to as early as the 1780s. A one and a half story, gable-roofed structure, it originally consisted of the current west portion (central hall with flanking rooms and a rear kitchen addition). It is of French Canadian “pièce sur pièce” construction (grooved upright posts with horizontal board infill). The house was purchased by Edward Biddle from Robert Dickson 1831. It is possible the Biddle family had rented the house as early 1822. The Biddles later added the east portion of the house and covered the exterior with clapboards. The interior of the main wing of the house featured fully plastered walls and molded woodwork. This also likely occurred during the Biddle remodeling.

Biddle, a fur trader, settled on the island after the War of 1812. Biddle’s grandfather, William Biddle III, had settled in Philadelphia in 1730, where his father, John Biddle, was born in 1736. John, a British loyalist during the American Revolution, moved to Nova Scotia following the revolution. Edward was born there in the 1790s. In 1819 Edward married island resident Agatha de LaVigne, a young Métis woman of mixed Odawa and French Canadian ancestry. Biddle was involved in the fur trade, business ventures, and politics on the island. As an independent fur trader Edward acted as a middleman, buying furs from local tribes and trappers and selling them to fur companies. He partnered with people like John Drew and William Mitchell in business dealings and held many offices on the island.